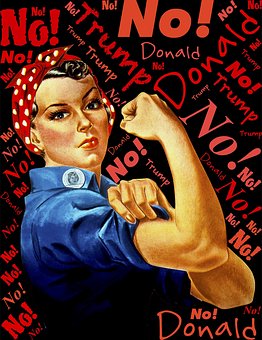 Trump may well prove to be the best thing that has happened to the people of the western world for quite a long time. While I’m not a supporter of Trump as his values are the opposite of mine I observe the effect he is having on individuals (albeit unintentional on his part).

Since Trump won the presidency that I really like to follow the news while driving. The news has come to be so exciting. Why? Within the Trump said/did headlines are inspirational stories of people taking a stand. They’re standing up, saying no that isn’t right nor just, and taking ACTION. Since the announcement of Trumps withdrawal from the Paris Climate Accord the stories on the news have jumped to a new level of inspirational, and additionally, these stories are carrying the vast majority of the information airtime.

People and organisations alike are suing the government. The judiciary standing in their own wisdom and power put a hold on the travel ban. The scientific community realising that to guarantee change occurs and shield efforts to reduce climate change, the ground and the environment they must become involved in politics and have voted into congress. Majors from a number of cities are thinking for themselves and making their own decisions.

Now European leaders are choosing not to participate with Trump whatever the power, riches and influence of the usa. These are only a handful from many cases of people making the decision to stand for truth, justice and what’s right and good.

Adhering to a Professor of Environmental Studies yesterday talking about Trump’s potential decision to pull out of the Paris Climate Accord create the most astonishing claim. He said as his initial response”Despite the conclusion of the US authorities the US Society will still back the Paris Climate Accord”. Notably he didn’t lament or criticise Trump, he did not bother, he was just focused on what could be done regardless of Trump. This is an incredibly daring statement and to me is symbolic of a real turnaround in human character.

Now with the Trump announcement that “Possum Poop” is pulling the US out of the Paris Climate Accord – the news is filled with people, cities, organisations, large companies all talking about their commitment to keep on supporting the Paris Climate Accord no matter Trumps decision. The news hasn’t been so inspiring as it is now. Trump is sparking a passion in people to stand in their own wisdom and power, galvanising and doubling their responsibilities to help bring about a world that’s clean and green.

People, Our Nature and Earth are the winners. Being faced with the disregard for the welfare of this world has electrified people to care more than ever before. Trump has generated an unparalleled dedication at an entirely new level to caring for our world. This will hopefully cause a long-term change in living in harmony with nature, caring for the water, the atmosphere, the earth, our world. It could even create a contest to see who can leave the lightest footprint on the ground.

As wild fires are needed each sometimes to burn off the old timber, rejuvenate and seed from the new beginnings of a new forest, so too is the uncontrolled flame of Trumps ego and self centeredness sparking a fresh start in the western world. Individuals are opting for justice and truth, balance and stability and locating within themselves the determination required to stand their own wisdom and power.

Folks learn and grow by hardship. Adversity and negative scenarios give us the chance to find within ourselves the ability to push back on the negative and rise up to become more then we ever could be before. We also can discover what we really want, what’s most important to us by being faced with exactly what we do not want. Trump is giving the people this chance, a chance even the best president couldn’t give.

This time in our history appears to indicate a fork in the road. I’m reminded of Hopi’s Prophecy Rock which has gained such prominence in the past two decades as a dire warning to humankind. “The brief line that contributes to the straight Path of Life is your last opportunity for people to return to character before the top road disintegrates and dissipates.” Trump and his manners represent so perfectly the top left hand street that disintegrates. The perfect hand path brings humanity back to nature”The little circle over the Path of Life, following the last opportunity, is the terrific Purification, and corn will increase in prosperity again when the excellent Spirit returns.

Trump provides us in the west the litmus test of this Prophecy Rock Life Path. It appears many folks are overwhelmingly deciding on the best path within the one represented by Trump, of selfishness, greed, substance focus and self-interest. They’re choosing the path of character, integrity, truth, justice, stability and equilibrium.

Trump is helping individuals to gain their own freedom, to genuinely individuate from the mindless following of authority and we could no longer be beholden come what may to”authority”.

To understand exactly how important the evolutionary shift is that is happening today, we must look back at how deeply ingrained was the requirement to obey authority within the mind and unconscious of humankind.

Happily Stanley Milgram gave us a step that we compare ourselves to. Revealing that we actually are changing.

They quantified the willingness of research participants, men from a wide assortment of jobs with varying degrees of education, to comply with an authority figure who taught them to do acts conflicting with their private conscience; the experiment found, unexpectedly, that a very significant proportion of people were ready to obey, albeit reluctantly, even if seemingly causing serious distress and injury.” Wikipedia. While some finally said no, even the majority of these individuals still applied the electrical shock lots of times until they said no and stopped.

Only a very few awesome people said NO quite fast. Sadly nobody explored what these folks were doing inside themselves that made them different from the majority. This sort of experiment has been demonstrated many times with comparable or even higher% effects. The requirement to comply with”authority” has been deeply hardwired into our subconscious.

Just 56 brief years thanks to Trump individuals in the west are standing up to so called”Authority” because that authority isn’t acting in integrity with the best interests of all and Earth. All this is being done in a calm and proactive manner. That’s singularly incredible. I call this a massive paradigm shift in consciousness.

This change isn’t occurring in everybody nor does it have to. All that’s needed is sufficient people to produce the 100th monkey effect for these changes to become generative.

Trump has no power by himself. Dating – with those who execute his wishes, the White House community, the organizations that implement the principles, the worldwide community and the People. Stress and bullying is no-longer a currency that works, just relationships that are respectful, co-operative, co-creative, based in ethics and for the greater good is going to do. Without these relationships he’s powerless.

Simply because Nature retains the layouts for life which we need for holistic health. Nature’s Design For Life attempts to bring the life improving qualities of joy, love, truth and peace into the lives of customers. Working together with you to bring greater balance and harmony in your life, improving your unique qualities and aligning with your souls purpose.

The Life Improving Powers of Nature at Her Best. .

First Light Flower Essences of New Zealand is the world’s top range of Flower Essences that efficiently and gently restores harmony. Effectively washing away injury, grief, distress. Nature’s Design For Life stocks the complete assortment of 144 plant essences which can be combined with up to 8 essences per mix to address most situations.

To change habits it’s recommended work with for two weeks with every issue you’re wishing to bring transformation to.